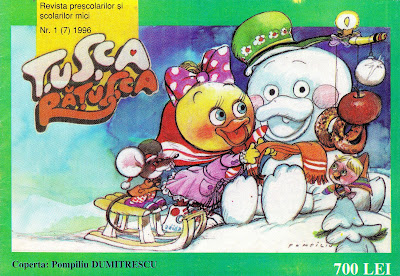 Ţuşca-Răţuşca  was a funny editorial project, appeared  in the avalanche of publications of the early to mid 90s. Tudor Popescu satirical playwright, with plays performed in all theatres in the country, constant collaborator of the magazine of satire and humour Urzica, formed a publishing house called POPET. The pretext? The galloping humour in that moment of unaltered censorship. He edited numerous books illustrated by cartoonists and a cartoon magazine. For Ţuşca-Răţuşca, published too under the POPET publisher, he turned  to  the famous cartoonist Pompiliu Dumitrescu, who is best known for the hundreds of illustrations and juvenile comic magazine Cutezătorii, to give life to a naive and playful duck and its friends.

Published in Italian format the magazine abounds in  Dumitrescu Pompiliu's funny characters, and the pages contain numerous poems written by Dim. (Dimitrie) Rachici, famous creator of Târlici character, illustrated by Ecaterina Draganovici. In addition to this literary part, the magazine was not missing in games, riddles and colouring drawings, being dedicated to children between 3 to 6 years. Among other illustrators that have worked with Pompiliu Dumitrescu we could name his wife and daughter, Ophelia and  Raluca Dumitrescu and two good cartoonists friends - Constantin Pavel and Cristian Marcu. Unfortunately, despise its commercial success, the magazine passed away together with Pompiliu Dumitrescu's death in the spring of 1996.