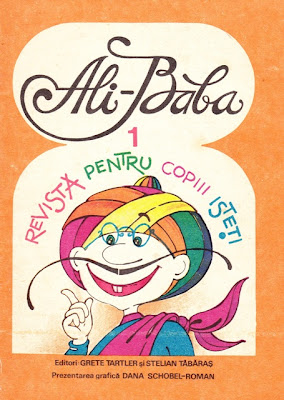 The beginning of the last decade of the last century in Roumania coincided with the end of a ruthless monster, whose ideological enzymes dissolved any nonconformist attempt. The year 1990 was a year of liberation on all levels, editorial as well, new publications emerging - some with potential,  others fleeting and scattered in the mottled pile of pulp, but most now forgotten .
The tiny magazine for kids Ali-Baba was born in the times described above. Modest appearance, undated on the cover of the first issue, but mentioned in  Dana Schobel-Roman's monograph as occurred in the year 1990 (season not available) is an  enthusiastic example, but of poor quality.
It was initiated under the folds of the Orient Publishing House by the espouses Stelian  Tăbăraş (1939-2009) and Grete Tartler (b. 1948), former Romanian ambassador to Denmark and Iceland, and fully illustrated by  Dana Roman Schobel, of whom we have already written here. The magazine provided its young readers with small games, puzzles, chess problems, abbreviated stories, language learning exercises, all of them wrapped in Dana Roman Schobel' playful style. 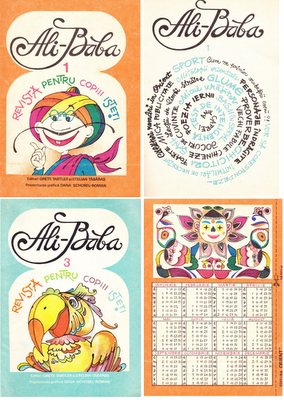